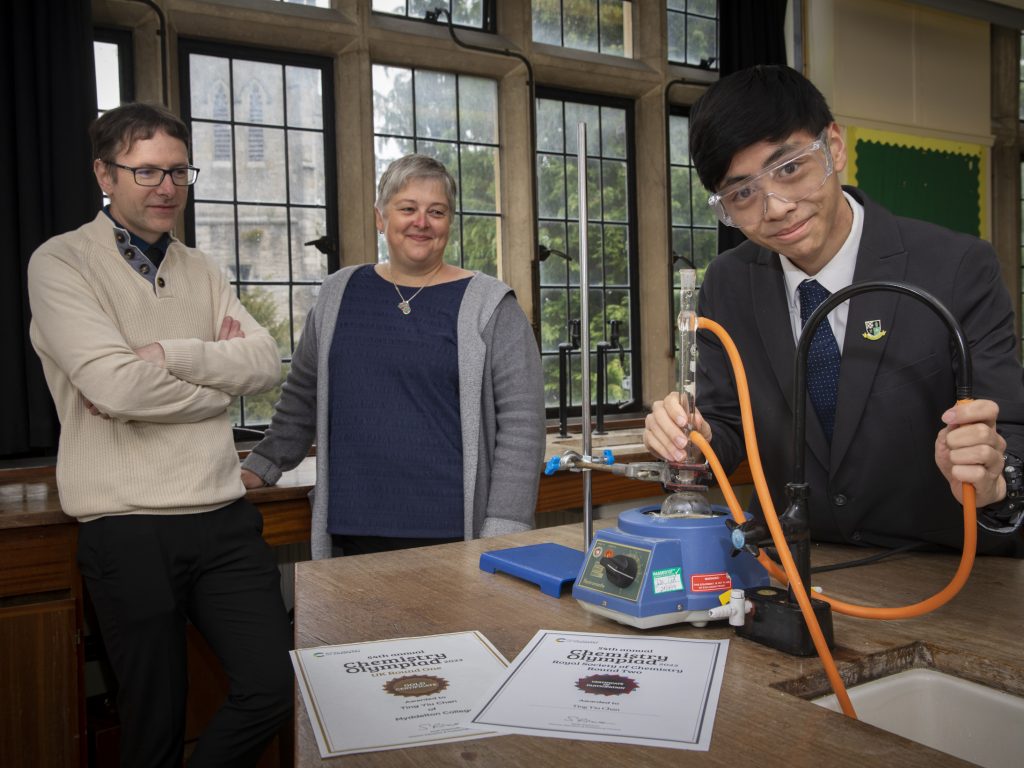 A young science prodigy at a North Wales independent school has received a major international accolade from one of the world’s oldest science organisations.

Coby Chan, 17, a Year 12 student at Myddelton College, in Denbigh, gained a gold award at the Royal Society of Chemistry Olympiad in competition against students aged up to 19.

Coby, from Hong Kong, who took his Chemistry A level two years early last year and was awarded an A-Star grade, finished in the top 35 in the gruelling event which is open to almost 10,000 students in the UK and in countries including Canada, Australia and the Republic of Ireland.

He was the only 17-year-old to qualify for the second stage of the annual event, a four-hour exam conducted remotely, which is organised by the Royal Society of Chemistry which dates back to 1841 and is the oldest and most prestigious chemistry organisation in the world.

Myddelton College Head of Science Lesley Corner said: “This is a really prestigious award and Coby has done amazingly well. He is very gifted, and he has worked very hard.

“He joined the school in Year 10, and we realised very quickly that he was someone special – he just loved chemistry from the start.

“His success has been really inspiring to his fellow students here at Myddelton and now he wants to take part in the Olympiad again next year.”

Coby, who acts as a Chemistry Ambassador at the school, helping his fellow students, and is also studying Maths, Further Maths and Physics at A-level, said: “The Olympiad was very difficult at first and a bit scary, but I managed to cope.

“I’ve always been fascinated by chemistry and wanted to learn more about it, and I’m interested in constructing molecules.

“I hope to go to Oxford University next year and then to work as an organic chemist in the pharmaceutical industry to manufacture medicines that are cheaper and more effective so as to help the world.”

The pandemic has been hard for Coby and other international students, and he was only able to fly home to Hong Kong once last year but he relaxes by playing badminton and reading.

He is taking his Maths A-level a year early this summer and he said: “At first it was difficult not being able to go home to see my parents, but I like it here and it’s part of my life now.

“I’m comfortable here and feel that Myddelton College and Denbigh is really my second home.”

Martin Galvin, Coby’s Chemistry teacher at the school, said: “The recognition from the Chemistry Olympiad is a testimony to his character and determination to succeed because in that four-hour exam he was really operating at second year university level.

“That is quite remarkable for someone who is only 17 but he’s almost certainly the most gifted student I’ve ever seen.”

Headmaster Andrew Allman said: “We are all delighted at Coby’s achievements. He’s a very gifted and mature young man and we’re very proud of him and the way he helps and inspires his fellow students here.”

Myddelton College, a co-educational day and boarding school, was the UK’s newest independent school when it opened in the autumn of 2016 and is the only school in North Wales with a 5G network.

The school currently has 280 pupils, 75 of them boarders and 70 staff, 35 of them teachers and Mr Allman added: “The school has integrated into the local community very well and we have formed sporting partnerships with a number of local clubs.

“We want to provide to well-rounded education and give all our pupils a breadth of opportunities, indoors and outdoors including the chance to work with and form bonds with people and countries all over the world.”