How theatre was kept alive during lockdown 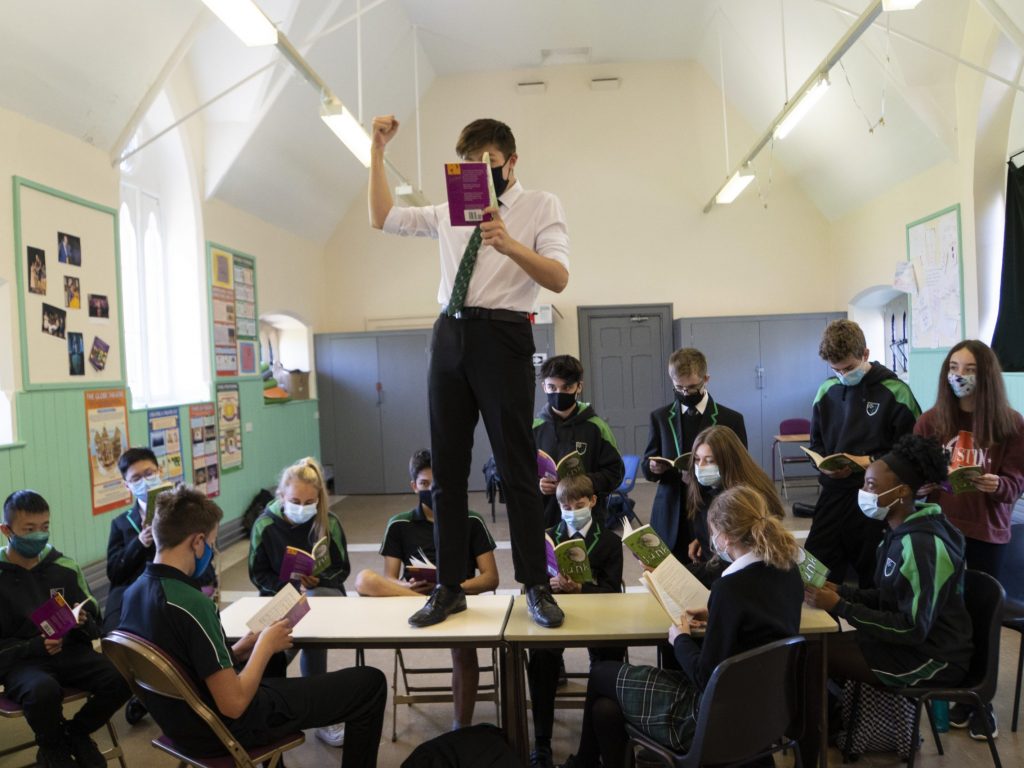 When the first national lockdown was announced a year ago, we were mere days away from starting our performances of Bugsy Malone that we had been working on for 6 months. It was the most disheartening feeling for myself, all of the pupils involved, the parents who had supported us and our audiences. We optimistically postponed the performance, but it wasn’t to be, we finally had to admit defeat and cancel it. We will return to Bugsy at some point, although only when it’s both safe to do so and when we have the right cast again. I choose a production to suit our current cohort every year, so may have to wait until Bugsy is a viable production again.

However, in the meantime, was I to abandon all hope of pupils being able to participate in practical Drama making? Not at all! We’re a 21st Century Learning school after all, so I made the most of all of the technology available to us.

During both online learning periods, Myddelton pupils were at a distinct advantage over pupils in other schools. All pupils had their own devices to work on, with built in microphones and cameras and as a school we already had Microsoft Teams and OneNote in place and used daily. As a department, we have access to Digital Theatre + with both recordings and resources of world class productions and I have connections with professional actors, directors and theatre companies.

We have embraced technology to perform virtually on Teams during Drama lessons, or self-taping monologue performances. We are used to utilising the recording technology in class on a regular basis for work in progress and final performances, which I then play on the classroom screen for instant feedback from myself, the performers themselves and their peers. However, during the lockdowns we could also quickly record a voice recording explaining our thoughts, type our thoughts in the chat section, adding in emojis, gifs, photos, videos and web links, enabling pupils to quickly and efficiently expand their understanding and connection with the piece or topic at hand.

In the time we were back in school from September to December, I continued to expand our use of technology in class to enable the pupils to continue performing safely. We used film making techniques utilising both the cameras on the pupil’s devices as well as our more sophisticated cameras, microphones and studio lighting to record their performances from a safe distance and maintain their bubbles. When recording scenes with others, we used forced perspective to make it look like people were closer to each than they really were, so masks could be removed, or recorded separate shots of each performer performing by themselves and then used editing to put it all together. We did this both in class for things like monologue performances, Christmas plays and both original and modern renditions of An Inspector Calls, as well as for our Disciples Of Theatre (DOT)  Drama Club. With DOT using these techniques we were able to record and release a full play of The Santa Interviews using locations around school.

At Myddelton, we were determined to give our pupils a wonderful Christmas celebration and so pulled out all the stops to have a Christmas Carol and song service in bubbles, socially distanced outside, which I filmed and added to the recordings from clubs and lessons to send out to parents via YouTube.

In the Performing Arts department, we make the most of having our own YouTube channel, sharing recordings or pupils’ performances, entering them for Drama competitions and even auditions for Drama school and professional work. We have many pupils who work professionally in various Performing Arts sectors, and by utilising a mixture of our YouTube channel, recording technology, Teams and Zoom, our pupils have been able to continue auditioning and gaining work.

One of the things pupils and myself miss the most in Drama, is being able to experience live theatre, as I run regular theatre trips, both locally and further afield. Instead, we have been able to explore live theatre in the form of recordings or live streaming. The availability of recordings of live theatre became much more widespread due to theatres being closed and so many performances were purchased for the pupils to watch. The prep school watched The Wind In The Willows The Musical, abridged Macbeth, abridged Twelfth Night, A Tale of Two Dragons and listened to a variety of radio plays. In KS3 pupils have watched Dr Faustus by Splendid Theatre and A Midsummer Night’s Dream by Shakespeare’s Globe Theatre. The exam classes explored a wider range of performances; NT’s Frankenstein, Things I Know To Be True, Accidental Death of an Anarchist and Hedda Gabler. Pupils have been able to develop their analytical skills, as well as being given the opportunity to develop and voice their own opinion on not only a wide range of theatre styles and plays, but also different topics.

In the first lockdown period, I performed in the interactive play “Around the World In Eighty Days” by PaperFinch Theatre, which was broadcast on Zoom. My part was pre-recorded using AR to adjust my virtual hair, make-up and costume and then played in conjunction with the live actors and the participating audience. GCSE and A Level Drama pupils experienced watching the show or participating in the show, making choices as to the route that Phileas Fogg took, through completing tasks and voting. They learnt a valuable lesson about being creative in the face of adversity and using technology as a tool for creativity, rather than for the sake of using technology.

In the most recent lockdown, I have given the pupils more ownership over their learning by building in more choice elements into their online work and I have incorporated more technical and design aspects into all of the lessons. The pupils have been able to utilise a variety of design apps to create their stage, costume, hair & make-up designs in 2D and even some in 3D. They have been able to share their ideas, get feedback from myself and their peers and then develop their designs. They have also had the benefit of watching professionals in action on YouTube, watching guides on creating 3D models and realising their design ideas in real life.

Whilst we wait for theatre to reawaken, we have used to technology to keep drama alive, relevant and exciting. It has been a way for our pupils to connect to the world whilst being isolated from it, to learn and develop, as well as an outlet for creativity and well-being.