Home | News | Elite Sports News | Star Skater Lily has the promise to become one of the best!
Share Page

Star Skater Lily has the promise to become one of the best! 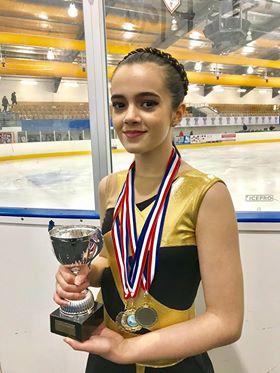 Lily, 12, competes for Great Britain and has recently won gold and bronze in a national competition in Telford, competing four years ahead of herself in the under 16 category.

Ice dance is a discipline of figure skating that historically draws from ballroom dancing. It joined the World Figure Skating Championships in 1952, and became a Winter Olympic Games medal sport in 1976.

She also gained fourth place in the under 19 category, a truly exceptional achievement from someone whose coach believes has the promise to become one of the best in Britain.

Ryan Southan, who has coached Lily since the age of nine, said: “Her achievements would be brilliant enough if she was competing at her own age, but to be 12 years of age and successfully pitting herself against people four, five and years older than her is just exceptional.

Lily has stormed to success since she started competing three years ago, becoming the highest level competitor at her age.

Last month Lily competed at the first solo dance series competition in Telford, finishing first and third in Advanced Novice, the under 16s category, and fourth in the Junior, under 19s, category. These results mean that she has already qualified for the British Championships in July.

This year she will be competing for Great Britain in Holland at the Unicorn Cup and Denmark at the Copenhagen Dance Cup. Last year she won Gold at both of these events at the lower level, Basic Novice under 15s. This time she’ll be aiming high and competing at Advanced Novice (u16) and Junior (u19).

To reach the heights she has hit has taken immense dedication and her training schedule is long and tough. It includes at least 10 hours a week on ice and four hours off which fits around her lessons at Myddelton College. Early morning starts at 6:15am on the ice and some evenings until 7:30pm.

We are very proud of our Ice Skating star Lily!